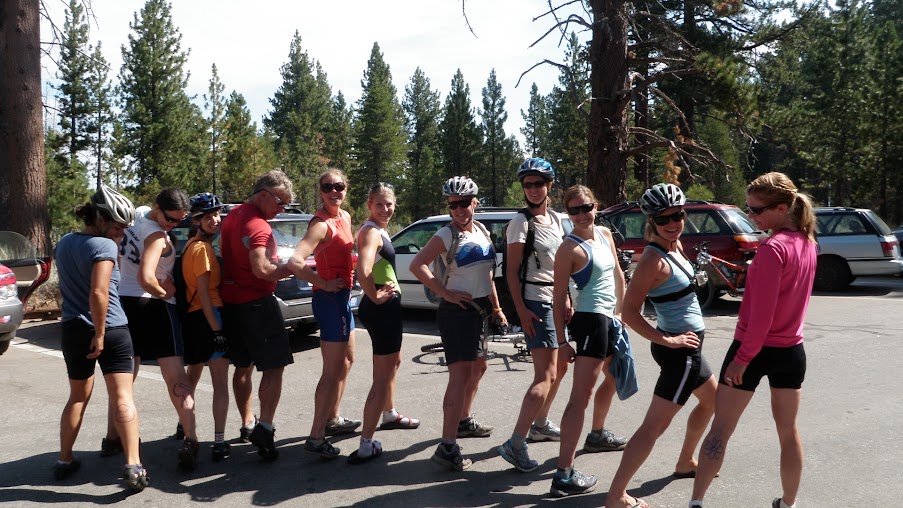 Last weekend was the 2nd Annual Angora Lakes Tri. The first one was held on the same weekend last year and we all had so much fun we couldn’t stop talking about it. It’s an unsanctioned, unofficial race with no fees, no bells and whistles, run on one or more volunteers with a bit of an unorthodox course: you ride your bike from the beach to Angora Lake, run from the parking lot of the lake to the lake, swim across the lake, jump off the 20 food cliff and then head back to the start line in reverse.

Last year, I was the first one up the hill climb on the bike and sort of assumed that whoever led the race at this point would always win. We had more contestants this year (11 instead of 4!) and I had a formidable opponent. Adrienne is a killer bike rider and she was probably about 5-6 minutes ahead of me on the bike leg and already in the lake swimming by the time I arrived.

I was sure Adrienne had this race in the bag! I was SO wrong. In a normal triathlon, where the swimming comes first, cycling second and running last, a fast swim leg hardly ever wins the race. In our unorthodox race, my swimming abilities really gave me the advantage. I was across the lake and back before Adrienne even reached the cliff. I then sprinted back down to the last transition area to hop on my bike. I knew that if I could get enough distance on the downhill on the bike, that MAYBE she would get stuck behind a car and I would win the race. 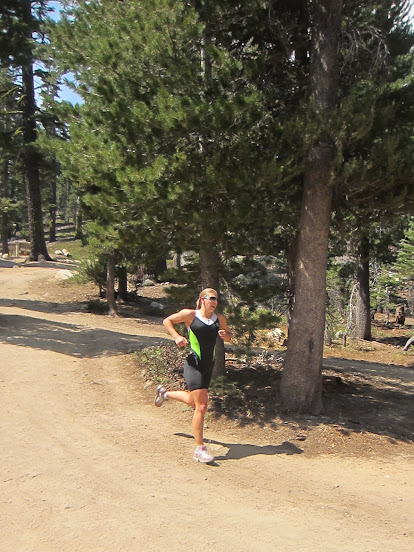 Coming into the last transition area. Thanks Will for being our awesome volunteer and a photographer!

I ended up winning for the 2nd year in a row at a time of 1:15.45, only two minutes faster than last year! It might have actually been considerably faster I had I not crashed on my first bike leg. That’s right – our unsanctioned race is so extreme that I crashed and continued to race.

You can read Meghan’s account of the day over at her blog. Thanks so much to all our amazing volunteers: PK, Boyfriend, Gretchen and Will! Also, big thanks to the Angora Lakes employee who somehow knew what we were doing and was high-fiving and cheering us on!