When you sleep in Kalymnos, you sleep with your garden facing patio doors open, with the feral cats meowing incessantly as soon as you wake up, the roosters serenading the town every night at 4 am and the random clinks of goat bells as they pass by the building or stir in the neighbors yard. 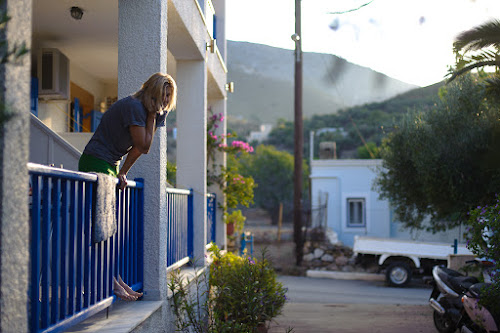 Breakfast is often Greek yogurt: Total Fage, thick and creamy like it’s been whipped to a frenzy, covered in local thyme honey, fruit and cereal we found at the corner store that we referred to as “abs fitness” because of the woman on the box.

The landscape is strange – similar to the high desert at home, filled with mountain brush and sage, but then limestone and just below, the crystal water of the Aegean Sea. 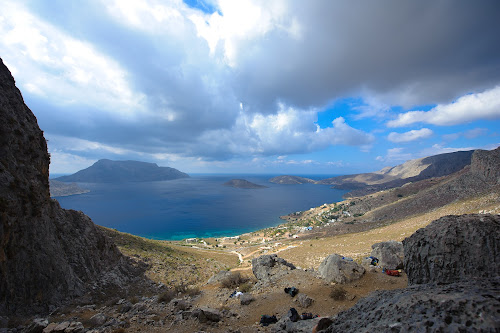 On my first day there, Bentley and Greg headed to the crag early to get some climbs in before any other climbers showed up. October signifies the start of the busy climbing season for Kalymnos and busy is a bit of an understatement. Not only have I never seen such a proliferation of climbs in one small place, but I’ve never seen so many climbers in one place. By noon every day there would be 10-15 people deep lines for some of the more stellar climbs at EVERY crag. There was no escaping it. Greg’s system was to beat the climbers there with the intent of getting more climbs in before early afternoon, which would allow him to relax at the beach the rest of the afternoon. His planned worked, for the most part.

I, however, having spent an entire day traveling the day before, wasn’t quite so jazzed to wake up at dawn and get started and thankfully a few of the crew were with me so the rest of us slept in a bit, ate breakfast and had coffee and then headed up.

The crag we climbed in the first day was relatively close to our small village. There was a bit of a scramble to get up there and the walk was littered with, yes, goats.

The climbing was nothing short of fantastic. Huge tufas and holds graced the entire wall. I was in climbing heaven. The rock reminded me of why I began climbing in the first place and then, why I no longer do in Tahoe. Dynamic powerful athletic moves await you in Kalymnos (but sadly, don’t even try looking for those in Tahoe). 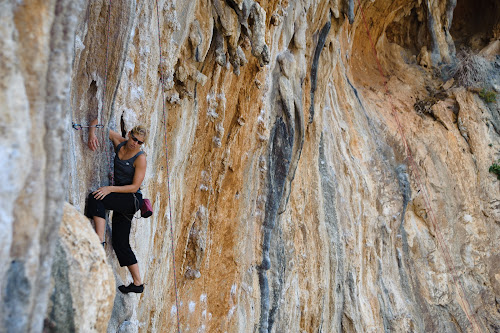 I only got on one climb that day, my endurance sapped by years of not climbing, but it was really fun to watch the boys bolt up impressive routes. We headed back to our village for lunch: swordfish and Greek salads from one of the neighborhood restaurants and then a long leisurely afternoon laying on the beach. 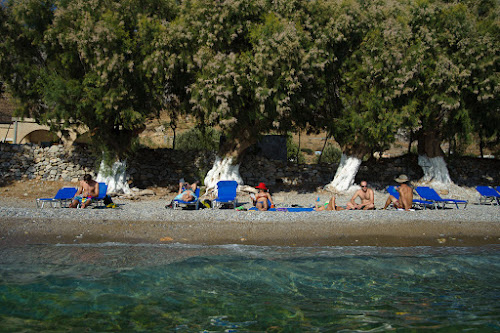 On the island the stores only stock non-perishable food and things like milk, yogurt, cheese and butter. Every night the “fruit truck” would drive into our village. His truck bed was filled with boxes brimming with fruit and vegetables. No matter how much you tried to refute him, he would insist that you have a bag. For a few euros you could secure a feast of kiwis, bananas, grapes, apples, whatever you fancy.

That night we had happy hour up in Greg and Suzee’s room before heading up to “fancy” restaurant in town. Our hosts, Evie, Dimitri and their family were celebrating their one year old’s first birthday with family and friends at the house and while we thought we were being respectful by giving them their space, they were extremely disappointed we didn’t come join them. Instead, we had a dinner of Greek salads, meatballs and roasted chicken up on the hill overlooking Emporios. It was about a quarter mile walk up there and we capped the evening off with an even longer stroll. 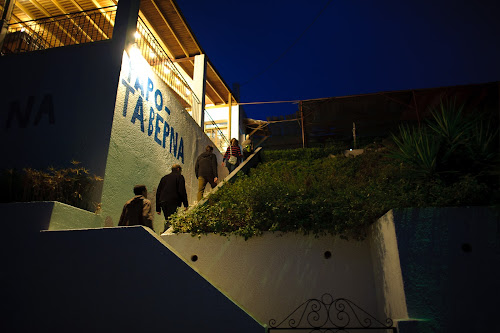