Every summer at Sand Harbor (near Incline Village on the north shore of the lake), the Lake Tahoe Shakespeare Festival happens. The theater program puts on a different play each summer and this year they chose Twelfth Night. Despite living here for five summers now, I had never been. I vowed to attend this year and when R invited me along with her I jumped at the chance.

Theater is something I get very little of now that I live in a rural mountain town. I think the last time I saw a musical was in Chicago, when K and and saw Wicked. I am ashamed to notice that was 3 years ago!

The Lake Tahoe Shakespeare Festival is really lovely. I regret that this is the first time I’ve been! It takes place in an outdoor amphitheater. You sit on a sandy beachy hill in lawn chairs provided by the company, bring wine and beer and have a picnic. 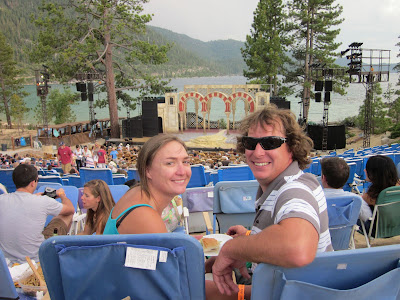 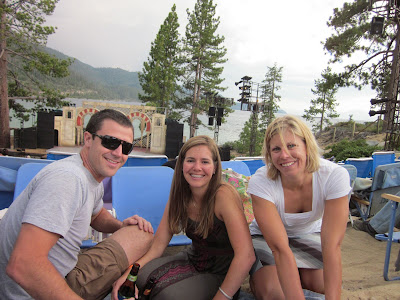 Scott, R and I

I meant to take Twelfth Night with me to work on Friday to glance over it as a refresher but unfortunately didn’t have the time. In the end, I was pleasantly surprised at how much of the play came flooding back to me with the opening scene. I immediately remembered the storyline: a classic Shakespearean tale of twins split apart, cross-dressing mistaken identities and love triangles. Even more odd, I remembered specific lines and songs, particularly ones from the court clown.

I thought the company did an excellent job with the comedy and the only actor I disliked was Alex Knox, the Duke Orsino. I thought his portrayal was a bit slimy and pretentious – not characteristics I felt Viola/Cesario, played so straightforward and rational by Laura Welsh Berg, would fall in love with.

In the end, even the raging wind/sand storm that plagued the first half of the show couldn’t damper our experience with lasting memories of time/money ill spent. Or perhaps it was the entire bottle of wine each we all had to drink that caused that?

All in all, it was an awesome and enjoyable experience and one that I look forward to repeating next summer.