Sam France, who has the stage bravado of a much more seasoned musician, keeps the crowd engaged.

SXSW can make a band.  SXSW can break a band.

Foxygen may go either way.

If you were at SXSW, or paid attention to the reviews and post-event write-ups, you should know that the young group cancelled their last two shows of the festival and European tour as the week came to a close citing the “creative health” of the band.  In addition, France made the additional comment, “I apologize if I have not delivered our music with love and respect my voice has gone from me and i have been very frustrated performing. I love you.”

I first caught Foxegen at the Paste Magazine Stages on Sixth day party, where they were introduced as the “buzz band to see at SXSW” but I unfortunately had to leave after four songs to shoot an assignment.  At the small intimate venue, they absolutely excelled.  Their music, evoking sounds reminiscent of the vintage threads they’re wearing, is wonderfully new, fresh and has me more excited than anything I’ve heard in years.  Part old rock-n-roll, part Dylan, with a sometimes hint of blues that Jack White would probably approve of, France’s voice is captivating, unique and changing (‘On Blue Mountain’ vs ‘Abandon My Toys’).  The back up vocals from the charming Elizabeth Fay have a bit of Zooey Deschanel in them and add an sweet surprising twist.  Check out ‘San Francisco’ for some standout sweet crooning from the lady. Fast forward to a few hours later on the first day of SXSW.  I see France sitting in the hall, looking exhausted already, on the floor in the corner.  I stop to chat and mention how much I loved what I saw of the show and how disappointed I was to have to leave.  “How many more shows are you playing?”  “Uh,” he says, ruffling his hair, “I dunno, I think like 13 or something.”

Someone at their management company should probably be fired.  Kids be damned, SXSW is rough.  It’s rough enough that no one should be playing 13 shows.  No one should be playing so many shows they can’t count or aren’t sure how many shows they are playing, as France was.  SXSW is exhausting, demanding, overwhelming, chaotic and wonderful in it’s own right.  I hope that the rest of the world looks past the young band’s mistakes, their booking agent’s lack of respect for their need to take a break and recognizes their potential, because it’s massive.

I saw Foxygen again that night at the Hype Hotel, a venue I have no love for (for more on this, reference #2: The Orwells post), where the sound guys so royally messed up everyone’s set (including the usually stellar Phosphorescent) that I can’t imagine they won any fans over.  The reviews I’ve read have been split on whether they thought they were amazing or horrifying.  Personally, I hope some of the people who managed to see them there caught them at a better venue later in the week.

Regardless of what everyone else thinks, I’m in love.  I managed to see their first show at SXSW, so maybe I am of the privileged few.   These kids are excellent performers, despite what their shows or hissy fits later in the week may have demonstrated.  I bought both their albums, which include 2012’s Take the Kids Off Broadway and 2013’s We Are the Ambassadors of Peace and Magic, and they’ve been in pretty steady rotation for the last few weeks with no signs of wearing out their welcome. 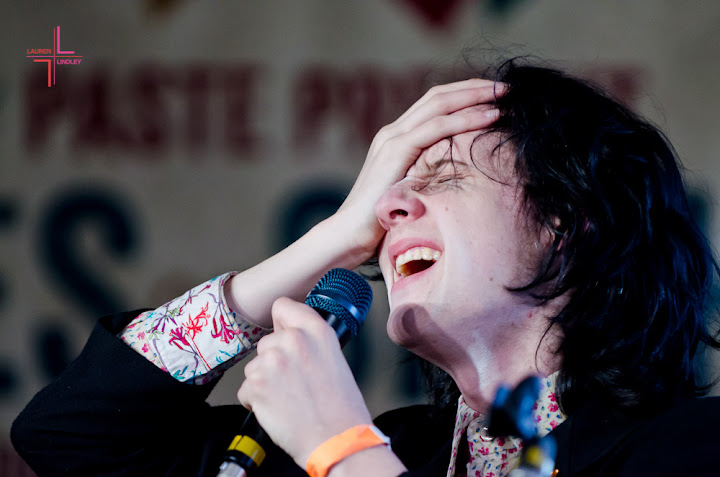 France’s facial antics at the Stages on Sixth, SXSW Day 1.