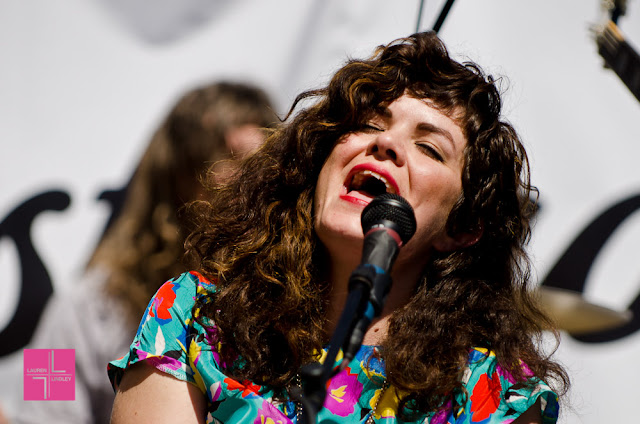 Social Studies’ Natalia Rogovin belts it out at the Haus of Hipstamatic Day Party at SXSW.

On the last night of the official SXSW music festival, I was assigned to shoot photos on the Hotel Vegas Patio on the East Side.  There were 10 punk and psuedo metal bands playing back to back 30 minute sets on a small outdoor stage with red can lighting.  I was exhausted.  My feet hurt.  I was over it.  The crowds were relentless.  The audience at Hotel Vegas was moshing, throwing beer and generally seemed to be under age drunkards.   I knew the majority of the photos I was taking were total shit but I didn’t care.  I would spend the last 10 minutes of a set and the first 10 of the next set taking photos and then I would walk around the corner to the delightful quiet, clean and sparse comfort of Vintage Heart Coffee where there was french pressed roasts, multiple double espressos purchased and a couch that I could sit on a dream of shooting a band where people didn’t poor beer on each other during the show.

On one such venture over that night, there was a young man asleep on one side of the couch.  I sat down next to him to do exactly the same thing.  Turns out, he was Jesse from Social Studies, a band that I’d had the good fortune of catching twice at unofficial SXSW shows: once at the Haus of Hipstamatic and once at the HGTV and Paste Magazine Stages on Sixth Day Party.   I spoke with Jesse and their front woman Natalia for quite some time before she rushed off to catch the Zombies and he to a real bed.  I told them I thought the band, which hails from San Francisco, CA, would do well in a venue like Lake Tahoe’s Divided Sky.  They were extremely nice, clearly exhausted, but social and their willingness to chat pushed them higher up on my list of bands I want to support.

Their brand of dreamy electronic pop (think Beach House or Poolside) is just my style and simply complex: carefully arranged adornments by the organ that don’t delve into anything too fancy or with too many overwrought layers.  Also, they book their own shows so hire them, now!