Our local community college, Lake Tahoe Community College, is putting on Richard O’Brien’s The Rocky Horror Show. Despite the fact that I spent more time than I would like to admit in my high school theater department and spent my life surrounded by fun, wild and quirky people who I’m sure all list The Rocky Horror Show on their list of most favorite things, I had never seen it.

In fact, I didn’t know a thing about it except that it was weird.

If you are unfamiliar, The Rocky Horror Show is a British horror-cum-comedy-cum-musical. It originally opened in London in 1973. The plot, which I find to be more of a tragedy than a comedy, surrounds a newly engaged couple getting caught in a storm and coming to the home of a mad transvestite (alien?) who unviels his new creation, Rocky Horror, in front of them. The script, though comical, doesn’t end on the highest of notes and I’m fairly certain that I still don’t quite understand what happened. That, however, is clearly part of the charm. It’s science fiction: just go with it.

Of course, as Rocky Horror fans will all tell you, there are rules to Rocky Horror. Apparently, you must dress up. You also must yell out certain things at certain times. And also, don’t forget, audience participation with props is essential. It’s weird, it’s wacky and in the end, it’s hysterical.

I had a great time at the show and I thought that the college’s actors were excellent. I was shocked to find one of my customers playing a role: it was a side of him I didn’t know! Quite a few of our friends are in the show and I was thrilled to not on support them, but be entertained with something completely new. 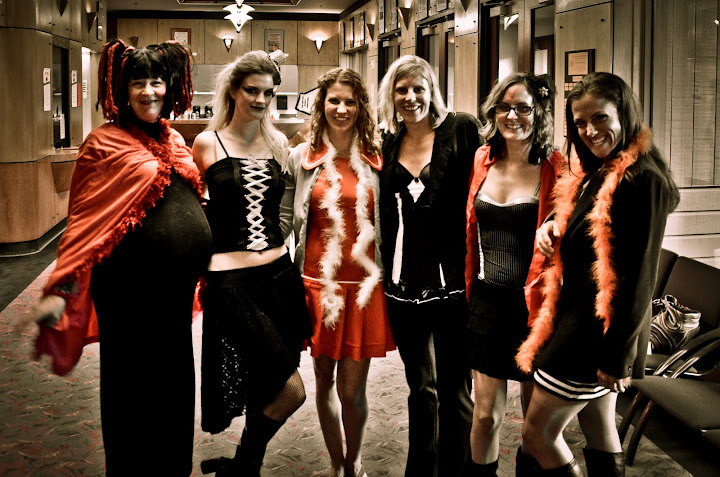 Our crew for the Rocky Horror Show

I’m sad I won’t be able to make the 11:00 PM showing for the play this weekend. I unfortunately have to work but I bet that most of the audience will be huge Rocky Horror Fans which would make the show all the better.