Our 7th day in Greece was the first day of full sunshine that we’d seen in awhile and we were all SO thankful. We planned a big trip for the day: to Vathi, a port town near Pothia.

The road to Vathi is one of the newest additions to the island; it’s corners were much less fear-inducing than those on the rest of the roads and it’s pavement was super smooth. It included a long descent into the agricultural farmland of the island: orchards filled with citrus fruit, olive groves and a visible lack of goats.

Vathi’s name comes from the Greek word meaning “deep or depth” or “deep harbor,” which is exactly what we found when we arrived: a picturesque harbor filled with small fishing boats and a long deep channel out to sea. 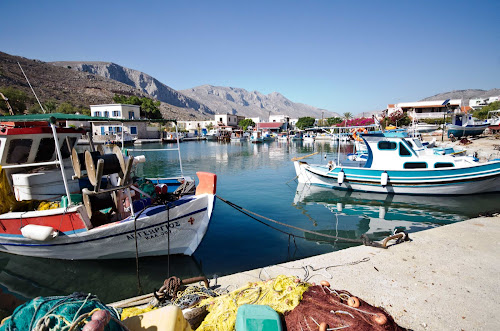 We really wanted to go to Vathi to take advantage of the deep water soloing. It was one of the reasons that Kalymnos was even on our radar. While we had intended to charter a boat to get to the cliffs, it turns out that most of the restaurants in the square will simply take you to the cliffs on boats for free, provided that you eat lunch at their restaurant when you return. We were, to borrow Michelle’s word, dubious to say the least. Despite the fact that people had been overwhelmingly generous in a trustworthy way our entire trip, the American in all of us still said, “but wait, what’s the catch?”

The catch was that the boat doesn’t stay. The captain literally left us on the side of a cliff and pointed to a cluster of rocks in the corner of the small cove and said with a very thick Greek accent, “tiny beach.” 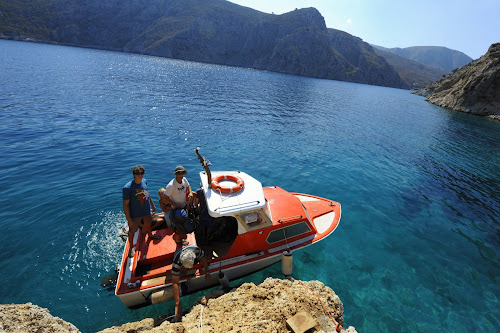 So, here we were, on the side of a cliff, with a tiny beach for two, in the sunshine and beautiful water, left to jump and climb to our heart’s contents. I’m not sure if you know this but I LOVE jumping off things. 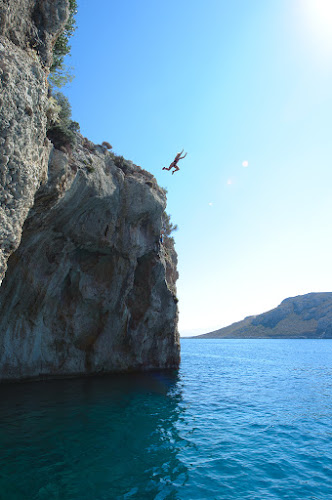 The boys climbed in the cave here and there, but apparently the deep water soloing is lackluster in Greece compared to the amazing crags that have been discovered on Lake Travis. Ellen snorkeled and taught me about sea urchins. Erik took photos. I jumped off the cliff a whole bunch. Greg and Suzee hung out on the tiny beach. Erik commented that he “really wanted to go to the beach but it was already too crowded.” 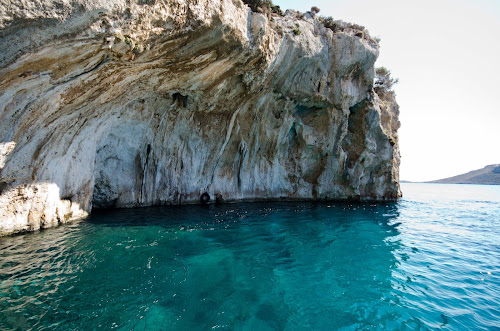 Our captain returned, as promised, exactly two hours later and we headed back to Vathi to eat lunch at the restaurant as promised. Ellen, Suzee and I also picked up some really amazing scarves. Side note: I was told to take scarves to Europe to blend in and now I, who at first said, “pffffft, me, in scarves! I scoff at that!” am now obsessed.

That evening, our hosts Dimitri and Evie had secured for us a leg of goat that was roasted similar to a pot roast along with pearl onions and potatoes. It was one of the last things on our Greece Bucket List to check off.