Our original plan had been to visit New Orleans for simply a weekend, heading to Voodoo Music Festival and showing off a bit of the city to Buddy. When I realized a good friend was getting married in Austin the following weekend, we decided to stay in LA the entire week: it simply made no sense to burn multiple days of vacation flying back and forth from CA. After missing my favorite fest, ACL Fest to move, I was jonesing for some great and new music.

We arrived in New Orleans on Thursday and after partying until the wee hours of the morning at Vaughan’s, woke up feeling not so sparky. Desperate for breakfast despite the late hour of noon, we hit up Restaurant Stanley on a tip from another cafe. This is what I ate: 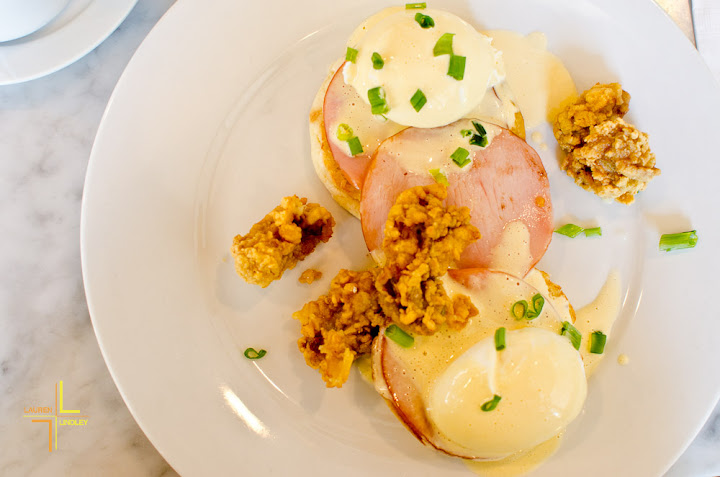 That’s right. It was like THAT. Eggs Stanley: Cornmeal-Crusted Oysters, Poached Eggs, Canadian Bacon and Creole Hollandaise on a Toasted English Muffin. Serious breakfast, ALL DAY LONG. Like breakfast SHOULD be: an ALL the time food.

Voodoo Fest takes place in New Orleans’ massive “City Park,” a 1,300 acre park in the center of the city. It is the 6th-largest and 7th-most-visited urban public park in the United States! It’s also famous for holding the world’s largest collection of ancient live oak trees, some more than 600 years old. The city hosts multiple festivals a year there, including Jazz Fest.

We arrived pretty late, thanks to our headaches and need for bacon, but had plenty of time during the day to catch some standout acts. My favorites from Friday included CC Adcock and the Lafayette Marquis, The 101 Runners and their tribute to Big Chief Bo Dollis featuring Big Chief Monk Boudreaux and members of various local brass bands, Gary Clark JR, and, oddly enough, The Avett Brothers. The Avett Brothers are this band that everyone just LOVES and you’re supposed to LOVE them to and I have the albums and I just didn’t LOVE them. Until I saw the show. What is subdued, underplayed and downright boring and mellow on their album is taken to a whole new level of power and persuasiveness in their live show. I don’t know that I’ll listen to the albums still, but I would definitely go out of my way to see them tour again.

Neil Young and Crazy Horse were playing but after hearing lackluster reviews from everyone about their live show, I decided to be responsible and skip it since I had to get up at 6 AM to go run a half marathon. It was a good idea. Day 1 of Voodoo fest was in the bag and we were happy, filled with music, and worked!