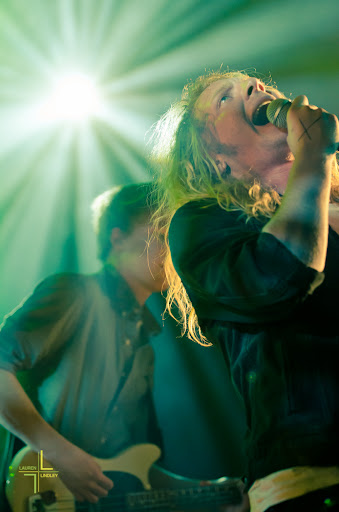 Mario Cuomo unleashes some punk rock for the crowd at Hype Hotel, SXSW 2013.

I had never heard of the Orwells when I showed up at the Hype Hotel on the 2nd night of the Official SXSW Music Showcases.  I came at the onset of the evening, unsure of how hard it was going to be to get in later with Jim James headlining.   I was really there to see Foxygen and maybe, depending on my mood, stick around for James.  Hype Hotel, from the start, was a total disaster.  During SXSW, there’s a myriad of pop up venues that lack liquor licenses.  They are backed by huge corporate sponsors and, as a result, pass out free drinks (in this case, Miller Lite and bad rum) and free “food” (Taco Bell).  The doors opened an hour late. The sound checks from start to finish were a total disaster, rife with problems like broken cables and non functioning keyboards.  The stage manager and sound guys were scrambling to cut acts short and make up time for the all important Jim James.

Since I’d arrived so early, I had secured a spot right against the stage.  In my world, not drinking at all is preferable to drinking any beer with the word “lite” in it, so I had no reason to move.  The first thing I noticed when the Orwells took the stage, other than their unique pop influenced punk sound, was that all their hands had giant black “X’s” on them: most of the band members check in at the ripe age of 17; only one of them (Cuomo) is old enough to vote.

They took to the stage like young punk rockers are apt to do, but there is something more to these teens than traditional punk angst: they are good, very good, and their version of punk is aggressively ambitious, catchy, and certainly much bigger and bolder than you would expect from a bunch of teens.  Frontman Mario Cuomo has long golden wavy locks, which he sends into spirals as he rolls and shakes his head, making faces that every photographer dreams of.  He pulls on his skin, rolls his eyes back into his head, drags his feet back and forth and then breaks into fits of jumping.

From start to finish, the Orwells’ show at The Hype Hotel was riveting and engaging.  These kids have serious talent and SXSW, and in particular, this show, may be what push them over the edge.  A handful of songs into their set, the sound manager signals that they have only two songs left, which unleashed a punk fit out the young rockers that ended with microphone stands being tossed, beers thrown on stage, and Cuomo dragged off stage by security.  It was an ending perfectly befitting their show and I loved every second of it: actions of young rapscallions that are eerily close to what I can only imagine was my own boyfriend’s childhood psyche, only one day, you become an adult and being a prima donna isn’t cool anymore.  Coming from 17 year olds though, it’s a wonderfully appropriate display of fury and fantastic to watch.

The Orwells is made up of Mario Cuomo (vocals), Dominic Corso (guitar), Matt O’Keefe (guitar), Grant Brinner (bass), and Henry Brinner (drums), all who met in high school and graduated early in order to tour.  Their first album, Remember When, was released in August 2012 by Autumn Tone Records. 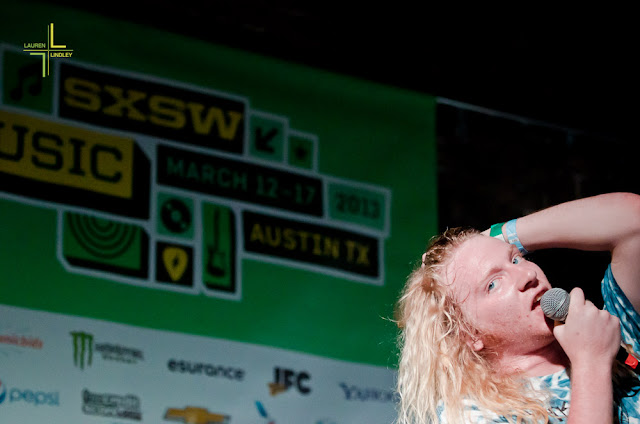 Cuomo riles up the crowd at the Brooklyn Vegan Day Party at SXSW 2013.