The 2.2 mile long Hiouchi Trail leads into Stout Grove, which, in and of itself, is very unique in the world of redwood groves. 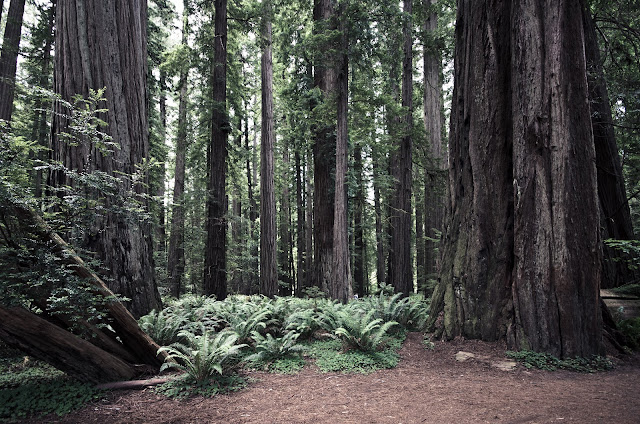 Stout Grove is special for a number of reasons, but primarily because of it’s general flatness. Most redwood groves are notoriously difficult to traverse and explore: thick foilage and underbrush, combined with fallen trees, often create extremely uneven ground. They tell campfire stories in the park about Jedediah Smith and his fabled difficult crossing through the forest, when it took 10 days to traverse three miles. He wrote in his diaries, “The traveling very bad on account of brush and fallen timber.” 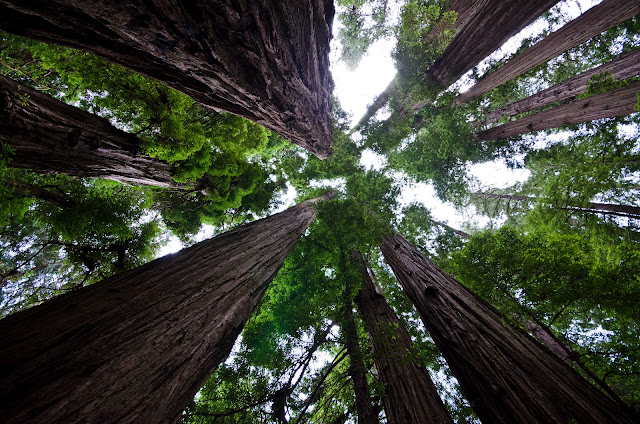 Stout Grove, however, is located on a bend of the Smith River, the last wild river in CA, and also, on a flood plane. This means that every few decades, a large flood sweeps through and clears out the underbrush and downed trees. This keeps the land flat and prevents too much wild overgrowth in the grove. 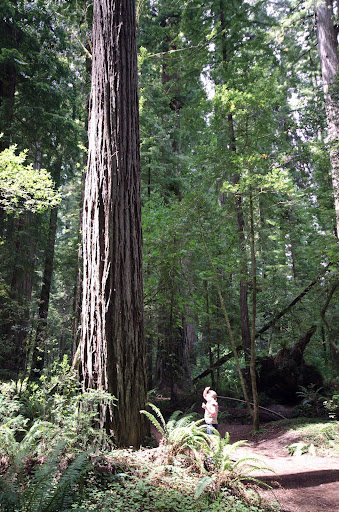 Redwoods are amazing for a number of reasons. First of all, they are incredibly resilient and extremely dense. They grow unbelievably tall. So tall that you cannot see the tops of the trees. The tallest known redwood at 379 feet is a hidden tree named Hyperion (more on him later!). Despite their heights, the roots only go ten to twelve feet under the ground! All of that massive weight helps keep them upright. That being said, these ancient trees do fall and when they do, they continue to help the forest. 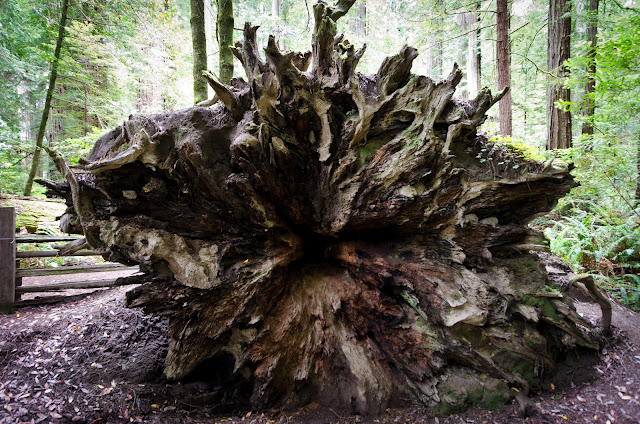 Redwoods contain a very special trait: the ability to create carbon copy clones of their DNA to reproduce. They do this with something called burl. 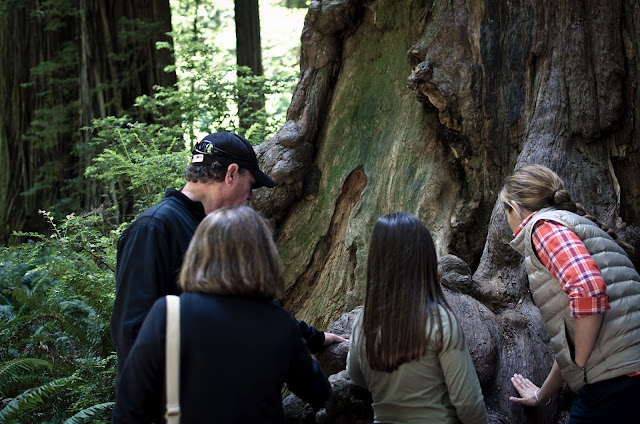 Burl, in plain English, contains the DNA code to reproduce an exact replica of the mother tree. When a redwood is damaged in some way, it creates burl and out of the burl grow new redwood trees. When a redwood tree falls to the ground, not only will it help feed the surrounding forest with essential nutrients, but new trees will grow out of it’s burl. When this happens, the tree is referred to as a nurse log. 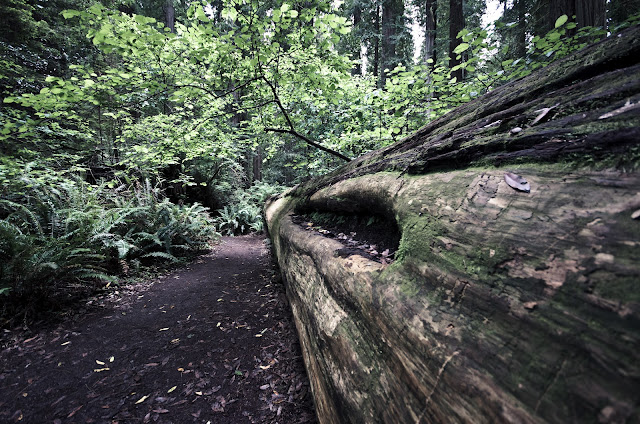 One of the biggest reasons folks travel to visit Stout Grove is to see the Stout Tree, which at one point was thought to be one of the largest redwoods but has now been dwarfed by others. It has 21,000 cubic feet of trunk volume! 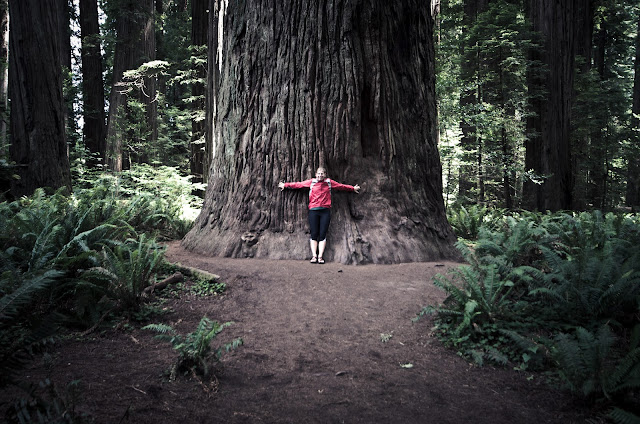 Today, the Stout Tree has fallen far down on the list of largest redwoods. It just happens to be one of the only ones that isn’t “hidden.”

In 1998 a botanist named Steve Sillett decided to go hunting for Titans in Jedediah Smith State Park. The search was long and difficult, not unlike Jedediah Smith’s traverse through the very same forest. You can read about the melodrama on the internet, which makes the entire trip sound like it was a near death experience. The short of it is that Sillett found a number of massive Titans in a grove which he then named the “Grove of the Titans.”

This is how melodramatic the story is: they call the day Sillett found the tress “The Day of Discovery.” YAWN.

Today, the grove is unmapped and untold of, mostly, from what I can tell by reading on the internet, because Sillett is a pretentious jerk who likes to keep things to himself. “They” say that the exact location of the grove is known only to a handful of biologists, who climb the trees and study the ecology of the grove. “They say” that the Grove of Titans exists at the bottom of a hidden, notch-like valley deep in Jedediah Smith Redwoods State Park. So, while the Stout Tree is the “official” largest tree in the park, there are many many more much more massive trees in the Grove of the Titans. When you google it, there are youtube videos from a nerdy science kid who finds the trees and posts them online and blog posts from people who spent days bushwhacking through forests looking for this “secret” grove of trees that not only is no one supposed to go to, but they also aren’t supposed to know about. You read stories about how people search for years to find these special trees and how fraught with peril their searches are.

Well, what’s the first thing I want to do when you tell me I can’t go see something awesome? Yeah, that’s right, I want to go see it. And I sure as hell aren’t going to be dumb and go bushwhack through forest to do it.

But first, it was time for dinner and that night’s campfire talk, led by Ranger Nate. 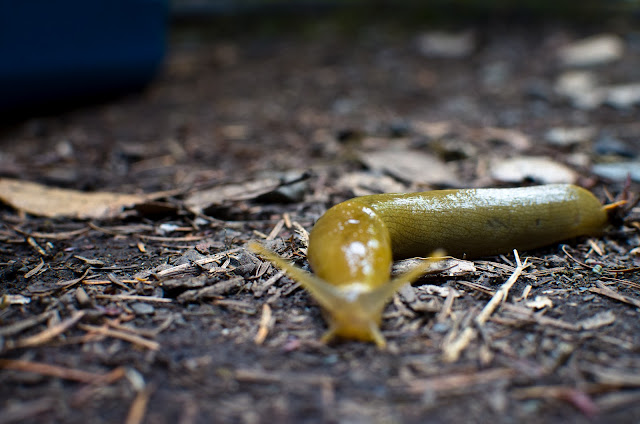 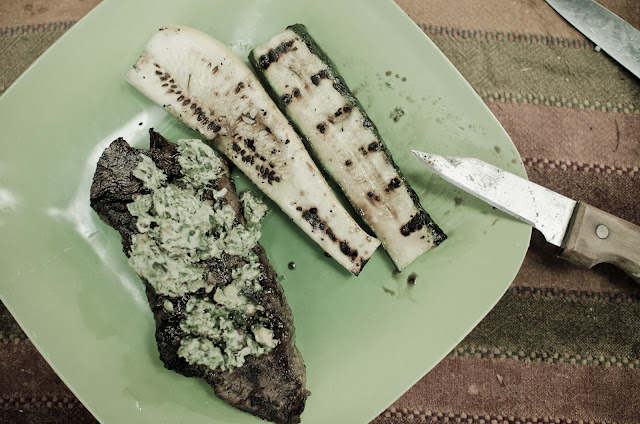